Dr. Gian-Paolo Dotto received his MD from the University of Turin, Italy, in 1979, and his PhD in Genetics from the Rockefeller University, New York, in 1983. After postdoctoral training with Robert A. Weinberg at the Whitehead Institute/MIT in Cambridge, Mass., in 1987 Dr. Dotto joined Yale University, New Haven, Connecticut, as assistant professor of Pathology. In 1992 he was promoted to the rank of associate professor and soon after moved to Harvard Medical School, as associate professor of Dermatology in the newly established Cutaneous Biology Research Center. In 2000 he was promoted to the rank of Professor at Harvard Medical School and Biologist at Massachusetts General Hospital. In 2002 he accepted a position of Professor in the Department of Biochemistry at the University of Lausanne, while retaining his position of Biologist at Massachusetts General Hospital.  He has been elected to the European Molecular Biology Organization (2011), the Academia Europaea (2012) and the Leopoldina German National Academy of Sciences (2014). He is the recipient of a number of awards, including the American Skin Association Achievement Award (2012) and an ERC Advanced investigator grant award (2013).


FIELD CANCERIZATION : A QUESTION OF SIGNALS

Field cancerization is a condition of major clinical significance consisting of multifocal and recurrent tumors with widespread changes (cancer fields) of surrounding normal tissues. It is associated with development of all common epithelial cancer types, with frequency of multiple primary lesions ranging between 3 and 90%, depending on target organs and triggering events. This process has also been linked to development of brain tumours, myelodysplastic syndromes and melanomas.

The main research efforts of our laboratory are focused on the concerted changes of epithelial and stromal cells that underlie field cancerization, utilizing skin as primary experimental system. Clinical relevance of the results is assessed by analysis of premalignant and malignant lesions of skin, head/neck and lung SCCs (squamous cell carcinomas) and breast cancer. 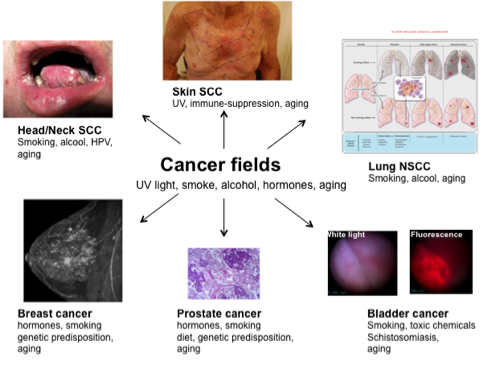 On the basis of the bad seed / bad soil hypothesis illustrated below, two main topics are being addressed : (i) intrinsic control mechanisms underlying the opposing balance between epithelial cell differentiation and cancer; (ii) role of underlying mesenchymal cells in control of epithelial tumorigenesis.

For representative publications and more detailed description, see below. 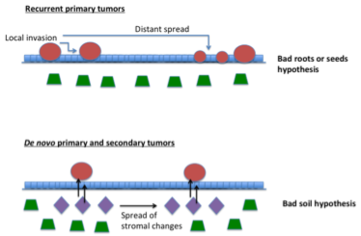 Field Cancerization : bad seed / bad soil hypothesis. Environmental insults, like UV irradiation or smoke, can target both epithelial and stromal compartments of organs such as skin, head/neck, lung, bladder or breast, with ensuing genetic and/or epigenetic changes. Establishment and spreading of “cancer fields” is the likely result of an interplay between epithelial and stromal alterations, with the latter playing an equally important and possibly primary role. The situation leading to multifocal and recurrent epithelial cancer may be analogous to that of a bad plant difficult to eradicate.  This may be due to roots deeply embedded in the terrain or the spreading of bad multiple seeds, growing in the presence of a permissive or favorable soil. An alternative possibility with important conceptual implications is that the main problem is the soil itself. A bad soil could corrupt properties of otherwise perfectly good plants or seeds. According to this view, unless the soil is corrected, various forms of prevention and intervention would be of little or no use.

i) Multifactorial control of squamous cell differentiation and cancer.

Squamous cell carcinomas (SCCs) are the most common form of human solid tumors in aggregate and a major cause of cancer mortality. These highly heterogeneous tumors arise from closely interconnected epithelial cell populations with intrinsic self-renewal potential inversely related to the stratified differentiation program. Keratinocytes and skin provide an attractive experimental system to study the connection between squamous cell differentiation and cancer. Notch signalling is an important form of cell-cell communication with a function that is highly context-dependent. A substantial body of evidence (reviewed in1) has confirmed and expanded our original findings that this pathway plays a key role in promoting epidermal cell differentiation and suppressing tumor development 2,3. We showed that the Notch1 gene, which plays the most critical function in keratinocytes, is a direct target of p53 and that down-modulation of Notch1 expression in keratinocyte-derived tumors can be explained by mutation of p53 4 or down-modulation of p53 expression by increased EGFR activation 5 or calcineurin inhibition 6. Notch activation, in turn, suppresses p63, a p53-related transcription factor with an essential role in maintenance of keratinocyte self renewing populations 7. Importantly, deep sequencing analysis of head/neck, skin and lung squamous cell carcinomas (SCCs) by a number of other laboratories has revealed that one or more components of the Notch/p53/p63 network can be inactivated by mutations in human SCCs, confirming their key role in the disease 8-11.
The cross-talk between Notch, p53/EGFR and p63 is at the core of a genetic network with a key role in keratinocyte growth/differentiation control and tumor development 12. Other components of this network are IRF6, a transcription factor of the IRF (Interferon Responsive Factors) family that we have recently established as Notch target 13, and miR34a, a microRNA with a key p53 effector function that we have shown to control squamous cell differentiation through the targeting of the histone deacetylase Sirt6 14.
We have further found that estrogen receptor ß (ER-ß) is an important direct regulator of Notch1 expression and function, and increased ER-ß signalling induces differentiation of cells derived from skin-, head/neck-and lung SCCs 15. The findings point to the possible use of ER-ß selective agonists for prevention and treatment of these tumours. Additionally, they provide a basis for further studies on the substantially different susceptibility to SCC development between male and female individuals. 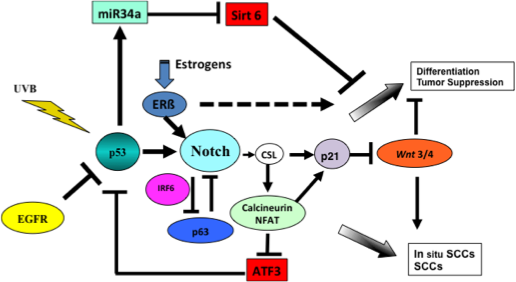 While great attention has been paid to the role of Notch signalling in keratinocytes and SCC cells, we have started to explore the role of this pathway in the underlying mesenchyme. We have developed a genetic mouse model with loss of Notch signalling in the mesenchymal compartment of the skin, finding that this pathway is essential for cell fate maintenance of overlying hair follicle keratinocytes 16. More importantly, by combined analysis of the mouse model and clinically-derived skin samples, we have uncovered a novel essential role of mesenchymal Notch signalling in field cancerization in the skin 17.
Field cancerization has been linked to the presence of genetic pro-tumorigenic changes in apparently normal ‘patches’ of epithelial cells that expand over time 18. Our recent findings indicate that compromised Notch signalling in the underlying dermal fibroblasts is likely to play an equally important primary role, resulting in tissue alterations (stromal atrophy and inflammation) that precede premalignant and malignant epithelial tumor development 17. Mechanistically, Notch signaling in dermal fibroblasts of both murine and human origin results in intrinsically increased expression of diffusible growth factors and inflammatory cytokines, cancer-associated matrix components and matrix remodeling enzymes, which are amenable to up-regulation of AP1 levels and activity 17.
The findings are of likely clinical significance, as suppression of Notch/CSL signaling and associated gene expression events occur in stromal fields adjacent to cutaneous premalignant lesions (actinic keratosis), and can be induced by UVA exposure, a major cause of skin aging and cancer-predisposing alterations17. We have established an intensive research effort to further explore the molecular and cellular basis of field cancerization in the skin and other organs, and assess the translational implications for prevention and treatment of epithelial cancer 19. 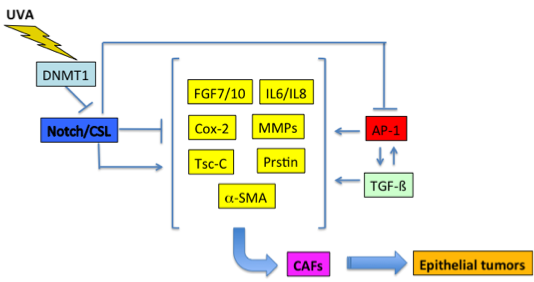 Summary diagram of the Notch/CSL-connected network involved in dermal fibroblast activation and skin field cancerization. The genes in the network are partially overlapping with those involved in the keratinocyte network illustrated above. The diagram is based on our recent findings that UVA exposure of human skin / dermal fibroblasts induces down-modulation of Notch expression and activity through specific mechanisms like increased DNA methylation of the Notch2 promoter 17. Notch suppression leads to up-regulated expression of AP1 family members and of AP1 target genes with a role in activation of Cancer Associated Fibroblasts (CAFS) and subsequent inflammation and promotion of cancer development17.